Developing and testing an intake manifold with individual throttle bodies for the Nissan VG30DETT engine.

The VG30DETT engine is used primarily in the Nissan 300zx from 1990-1999. The intake manifold for the VG30DETT has 49cm long primary runners which give the engine a particular volumetric efficiency curve. The disadvantage of this design is that the engine produces poor volumetric efficiency at around 4000rpm, showing up as a dip in the horsepower curve. In turn though, this design allows the engine to produce strong, constant horsepower from 5000rpm up to the rev limiter.

Picture below is the dynosheet of the factory horsepower output at the rear wheels in 4th gear, notice the dip in power. The dip in power occurs on all VG30DETT’s with the factory intake manifold, regardless of camshafts or larger turbo’s used. The blue line is the factory setting, the red one adjusted by me with improved air/fuel ratio. The engine covered 234.000km, and is about 10-15hp down. I’ve always wanted to design a marketable intake manifold for this engine, with individual throttle bodies (ITB’s) for increased throttle response. In addition, the length of the manifold can be shortened and the effect of this studied. However, the 300zx has very little space in between the bonnet and engine, so far noone ever succeeded in developing a production manifold. Apart from the added throttle response, ITB’s can make use of larger and smoother manifold collector chambers and as a result, more power over practically the entire rev range. Although I had some experience working with factory engines with ITB’s (such as the Sunny Gti-r and several motorcycle engines) I had never built one from scratch. In order to make the system work properly, I had to take numerous factors into consideration;

-The VG30DETT has an airflow meter that allows the engine to compensate for increased airflow. However, as ITB’s flow much more air per opening degree than the factory throttle bodies, will the engine management system be able to cope with it since the throttle position sensor (TPS) is seeing lower readings for the same mass airflow?
-Will the engine be able to idle correctly, and provide enough low pressure for vacuum operated parts (such as brake/clutch boosters)?
-The valve covers will have to be milled down so that the new manifold can lay on top of it. But will this affect the crankcase venting?
-Can the hood/bonnet still close?
-Is it possible to align the throttle bodies for proper fuel mixing and airflow? (this is being explained in detail at the bottom of this page)

The ITB’s are made by Jenvey, located in the UK. All other parts were custom made. The Jenvey ITB’s are just 30mm thick, and the 45mm ID offers the exact same cross section as the Nissan manifold. To allow more room for the shorter, larger manifold collectors the intake valve covers were milled down, received new lids and a new oil filler neck. The factory ignition coils were modified for a lower fit underneath the manifold and new brackets were welded against the exhaust valve covers to hold them. 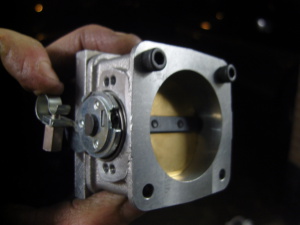 The factory intake manifold consists out of 2 sections. The lower part sits in between the heads, where the upper manifold with the long runners bolts upon. The upper section was ditched and the lower manifold modified to fit new vacuum lines for each inlet runner for a smooth even idle from all cylinders, forming a manifold itself. As these lines are difficult to reach, 100% reliability is a must, so I made them from high pressure fittings. The throttle body for cylinder 2 receives a shaft extender so the levers on both sides can be connected through quadrants. Flanges were welded on top of the lower manifold and decked on both sides for a perfect fitment. The caps that bolt the fuel injectors down touch the ITB’s, it takes the removal of a small amount of each to fit. 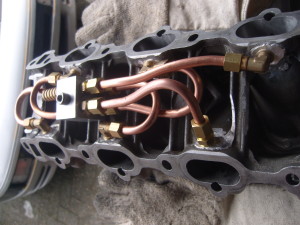 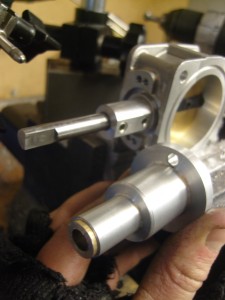 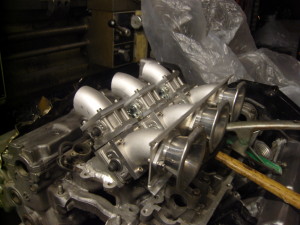 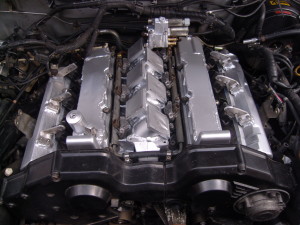 The complete length of the main runners was reduced from 49cm to 39cm, and high quality velocity stacks were installed. These stacks allow the air to pass smoothly in and out of the runners. By ‘raising’ them from the floor, disrupting pressure waves are less likely to attach to the cylinder next to it. The volume of the manifold chambers was increased substantially, approximately twice the factory volume. A key benefit to ITB intake manifolds is that the throttle bodies do not disrupt the airflow from the intake piping (in this engine coming from the intercoolers) to the manifold chambers being just a smooth, wide open path. The idle air unit connects to the lower manifold through an L shaped hose. The throttle position sensor is mounted to the ITB on cylinder 6 through a short conversion shaft. 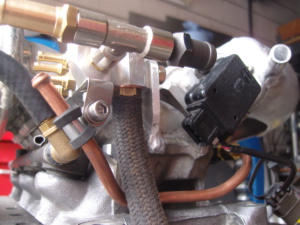 Almost done. The short pipes coming from the intercooler piping were also custom made. They increase in size from 50 to 70mm over the short distance. The finished manifold, with the timing belt covers removed for easier access. Note the linkage between both banks by use of wheels and quadrants. On the road, I could feel that the engine didn’t really seem to respond much to the ITB setup, it actually felt smoother and calm over stock. The aggressive nervous behaviour wasn’t there at all, though the high weight of the car might have something to do with that feeling as well. The factory idle should be at 700rpm, but now difficult to get below 900rpm as the ITB’s allow small leaks past the butterflie valves that increase the idle speed. Strangely, the engine idles smoother at 900rpm than the factory manifold at the same rpm. What became apparent during the first road tests, was that the engine might not have become more aggressive, it does feel considerably more powerful over the entire rev range.

I choose to use the Dynojet facility at Moritz tuning, their electronics are somewhat lacking (the Dynojet shows erratic readings from the engine speed signals) so the engine’s power was calculated based on wheel speed. The dynotest confirmed my feeling on the road, the engine made 263 horsepower at the rear wheels, and it lacked the odd dip in power at 4000rpm. Considering the engine’s age and (hot) test conditions, and the known trustworthiness of Moritz’ Dynojet, I was pleased with the result. Also, the factory engine management is tuned to the factory manifold, making the result even more impressive.

Below is the dyno read out from the ITB manifold. 3 runs were done, but as the engine suffered from heat soak due the hot conditions on the dyno and resulting overfuelling the 2nd (green line) and 3rd run (red line) were down on power from the mid range on. The blue curve shows no dip in the mid range, just a smooth build-up of power, like it felt on the road. However, the engine does see a fast power drop in the last few hundred rpm’s. This shows what happens when the length of the intake runners is adjusted. By increasing the power in the mid-range, cancelling out the dip a new one is created in the last few hundred rpm. The ITB manifold produces 22hp more and sees an increase up to 14% in mid range power. Apart from the small overtake by the factory manifold near the rev limit, the ITB manifold produces much more power over the entire rev range. 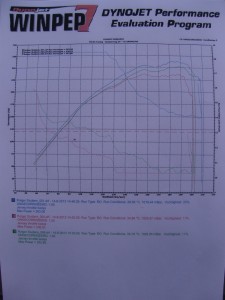 Video made from the testing;

The fabrication of this complete manifold costs approximately 70 hours, even without the 2 short pipes coming from the intercoolers, part that many will want to customize bespoke to their own piping. The most time consuming parts are the idle air manifold and it’s modifications, but also skimming the valve covers and rewelding them. For the VG30DET ITB manifold I switched to cheaper hose connections, which would reduce the manufacturing time by up to 5 hours. Also, modifying parts at the same time for multiple manifolds saves time. In mass production I may be able to reduce the total production time to about 50 hours. A complete manifold would do up to 3000 euro complete, but the price can lowered substantially by leaving out parts and modifications such as the intake pipes, the idle system or the complete manifold collectors when the manifold is used on a non-turbo engine. 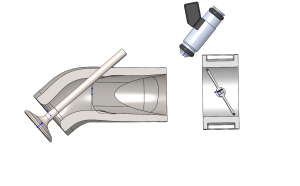 Opening towards upper port side 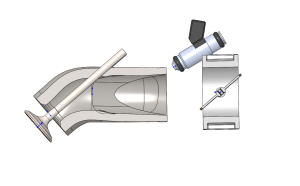 Opening towards lower port side

Proper fuel mixing is of primary concern for anything from an eco-box to a race car. In order to properly mix the fuel, it is best to point it at the wall that the butterflie points towards as it opens. With the air adhering to the port and the fuel injected against that same wall, the best mixing results are achieved. When the butterflie plate opens towards the side of the cylinder, the fuel will mostly enter along just 1 valve. Not only does this result in a poor air-fuel mixing in the port itself, the swirl inside the cylinder is degraded as well. A good example of this problem is the BMW boxer motorcycle range, in particular that of the 1150 and 1200cc engines. When the first 1150cc fuel injected engines were fitted to BMW’s bikes, owners noted poor engine response and misfiring at certain rev ranges, often while cruising. In order to overcome the problem, BMW converted to 2 spark plugs per cylinder. But the root of the problem was that BMW had installed the throttle bodies and injectors horizontally so that they ‘pointed’ towards the ground, but as these were boxer engines the air/fuel only entered the bottom inlet valve. With the 2014 BMW boxer engines, BMW fixed the problem by flipping the cylinders with the intakes facing up and the air/fuel entering the cylinder through the lower side of the port. Consequently, these engines use just 1 spark plug per cylinder. The correct opening angle for the throttle bodies is towards the ‘lower’ side of the port, where the short side radius bend in the port is, in front of the intake valve. But why is this better than promoting the air/fuel mixture to go in through the upper part, or wide bend valve radius part of the port? Air tends to adhere to the surface it flows over, and it has a much harder time adhering to the short radius bend, as naturally, the inertia forces are so much greater flowing over this short radius than at the upper part of the port where the air is being forced against the wall of the port. It’s also the most direct path for fuel to enter the cylinder along the valves. Therefore, manufacturers normally choose to have the butterflie plate open towards the lower part at the short radius part of the port and have the injector spray along.

However, I did find several exceptions to this apart from the BMW engines described above (oddly, BMW does use the correct opening angle for it’s M series car engines). One was on the Nissan Sunny GTi-R SR20DET engine, which was developed at the same time as the RB26DETT found in the Nissan R32 GT-R in 1989. The individual throttle bodies were correctly installed on the RB26DETT, but the GTi-R had them opening towards the upper part with the injectors facing down towards the intake valves. I think this was done as a last minute production compromise, perhaps to make up for space for the large intercooler, or cover problems aligning the throttle cable. I also noticed carburators run butterflie plates facing upwards, but this makes sense as the fuel has to be drawn upwards from the bowl and drawing it over the butterflie plate will likely enhance mixing quality.