Couple of fun repairs I did on an old wheel loader. 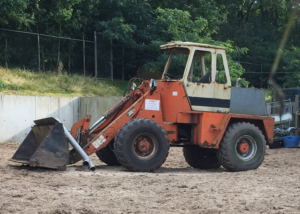 This Schaeff wheel loader is in possession of the association where I work as a volunteer. Built in 1988, it was bought somewhere in 2004 to install 1500kg Stelcon concrete plates on the terrain. The machine was not used much or maintained at all thereafter, and recently I took an interest in it. I inspected the machine from top to bottom, filled up it’s fluids and found several peculiarities.

The old fuel filter did not seem to have been replaced in ages and the overflow part of the mount was filled with debris. New oil and fuel filter, a quick bleed on the fuel system, new battery and it fired right up. 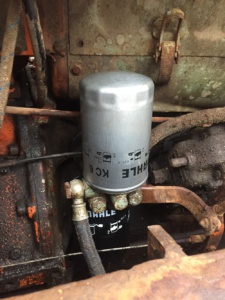 The loader has a common articulated chassis, but I noticed there was alot of play in it, in fact, it turned out to be missing the top bearing. It was stuck on the upper edge of the bar. There were clear ‘punch’ traces from attempts to remove it from the housing. I guess someone wanted to replace it but concluded it was too costly and sold the whole machine. A full repair can cost over 5000 euro’s if the loader is split and the housings milled oversized with a special miller/cutter. The thread end in the 4th picture is a sheared 10mm bolt. The other 3 bolts were missing and so was the plate that covers the bearing. It turned out someone has tossed a bronze ring into the hole as a quick fix. This ring had worn and broken in 2 in the longitudinal direction due the massive loads. Fortunately, the bar and housing weren’t damaged. The bearing is a common and not expensive GE50ES, so I took no risk and bought a new one for about 20 euro’s. I also found the round plate that keeps the bearing in place, it was lying lower around the joint and fully covered in grease. Also found a 1mm thick ring that sits in between the bearing and plate. The area on top of the bearing is very shallow and difficult to get to, but through a hole just in front of the driver’s seat services can be done. I performed a test fit with the old bearing that I had cut down 0.10mm on the lathe and it went in. Since the chassis moves, I had to use the lifting arm to push the front end up and place a brick underneath one front wheel to align the bar and hole. Now getting the new bearing in was less difficult than I had anticipated, there was no damage to the shaft nor the housing to narrow the fit so by using long bolts and putting them down one by one the bearing slipped into place. 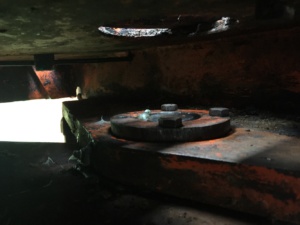 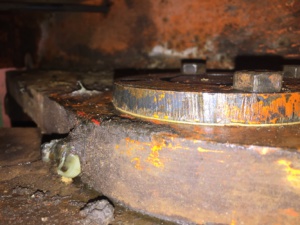 After installing it I applied the grease gun but the grease would quickly evacuate the bearing on the upper part. This was caused by vertical scratches to the housing around where the bearing sits. I managed to stop the leak by placing a paper gasket in between the bearing and the 1mm spacer ring. The grease now evacuates on the lower side where it’s supposed to.

The loader had clearly not been washed in ages and after it developed an oil leak that I couldn’t locate I decided to pressure wash the whole thing. Notice the oil on the prop shaft. 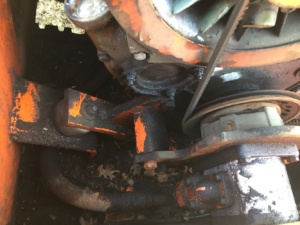 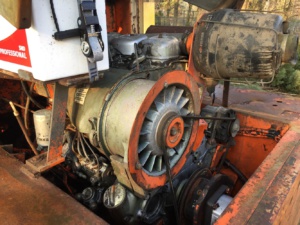 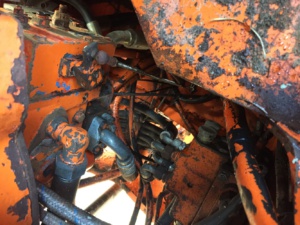 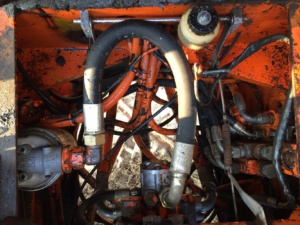 The oil leak turned out to be coming from the hydrostatic drive, an O-ring was all but gone. Another leak occured from the pressure wash itself, this time an oil seal from the unit that locks the bucket in place. Inexpensive repairs. 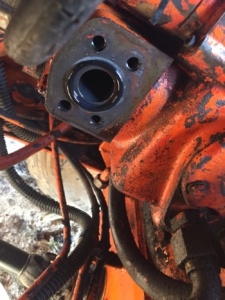 After the oil leaks were fixed and the machine was running fine it all of a sudden would not go forward anymore. I removed the dashboard and messed about with the wiring to no avail. Since it has a hydrostatic drive it also has 2 solenoids that divert the oil, so I swapped the 2 plugs and it would only go forward. This was a big relief since it ruled out an issue with the solenoids or hydrostatic drive as a whole. The front window has been removed and with no cover over the dashboard and it’s electronics, water eventually took it’s toll. I pulled out the whole dash and cleaned every connection with a small dremel tool. After installation, everything worked fine again and the machine drove better as a whole (less hesitant). The dashboard is now covered by a piece of plastic until the window is replaced.